Calm seas this week have allowed us the opportunity to escape from the office and head out to sea to continue monitoring the marine wildlife of the Cardigan Bay Special Areas of Conservation (SACs).

On Saturday we set off from Aberystwyth on board the Machipe and within half an hour we spotted dolphins! It was a group of 8 dolphins in total, and that included a juvenile, a calf and a newborn. Following this we didn’t encounter dolphins for the rest of the day, but we did see our fair share of grey seals and harbour porpoise!

On Sunday we headed out to sea again, this time from New Quay on board the Dunbar Castle II. At around 12pm some dolphins were spotted in the distance, and as we drew closer we realised that there were several groups of dolphins in the area. It took almost 2 hours to get photographs off all of the fins for our Photo I.D catalogue but in the end we had a total count of 17 dolphins, a group consisting of 12 adults, one calf and 4 newborns. Amongst the group we had some very familiar looking fins, including our adoptable dolphins Chris and Smoothy.

We have also seen plenty of dolphins leaping and feeding around New Quay Harbour this week, and in addition one of our volunteers got a great photo of a large male grey seal while on board the Ermol VI. Check him out in the photos below! 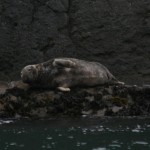 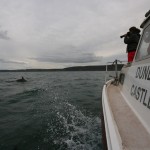 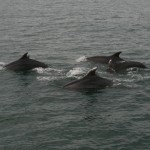 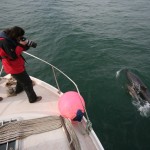 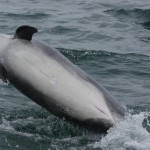 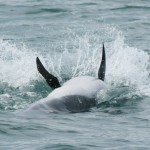 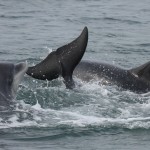 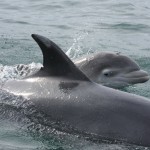 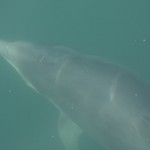