Sea Watch welcomed a rather different member of crew aboard the RIB, Pedryn on Sunday 19th August. Caroline Quentin, presenter of a new series, ‘Caroline Quentin’s National Parks’ which is to be broadcast in July 2013, arrived in Pwllheli, North Cardigan Bay, with an ITV camera crew, ready and eager to film an episode specifically on the spectacular Snowdonia National Park.

After three hours of searching, nothing had been spotted and the ITV team were beginning to despair. The time was nevertheless used constructively, with interviews conducted and the cameraman capturing the exquisite surroundings of the Pen Llyn a’r Samau Special Area of Conservation and adjacent Snowdonia National Park. Not discouraged, the Sea Watch researchers are used to searching for dolphins for long periods of time, and understand that patience is a virtue when searching for wild animals such as dolphins that are very fast swimmers and can move around from place to place very quickly and at times unobserved.

After yet more time, they decided to try searching in one last location, the Tudwal Islands, which we know is one of their favourite haunts. It was coming towards high water and the many boats seen in the vicinity earlier had gone home so Peter from Sea Watch and Paul, the CCW boat skipper slowed down to carefully investigate the area. The sun was setting, the sea was calm and inviting, but still the dolphins were nowhere to be seen. On the verge of giving up, suddenly out came a beautiful and elegant dolphin a couple of hundred metres in front of the boat, swimming in our direction.

Everyone, including Caroline and the TV crew, were ecstatic and unable to take their eyes and lenses off them. It was the first time that many of them had seen dolphins up close and personal, and it was an incredible moment. Four of the dolphins within the group included Bella – a female seen in Cardigan Bay since 2006, Ticklefish – a male we’ve seen in the area since 2003, Bond – who  requires no introduction, and a  dolphin, which was added to our catalogue in the summer of 2011 but currently has no nickname.  We therefore asked Caroline to name it for us and she happily agreed, choosing ‘JONESY’ as it was her nickname when she was younger, and it brought back fond memories

Since Bond is one of the dolphins up for adoption, Caroline said she now feels very close to him, and will consider adopting him as well!

This blog was written by our Monitoring Officer, Daphna Feingold. 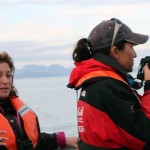 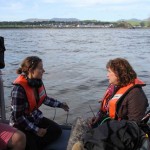 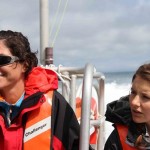 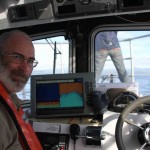 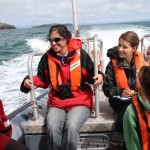