From Coast to Coast: Youth Training in St. Abbs

by Sightings Officer
0 Comment
St Abbs, Training Course
Katrin Lohrengel – SWF Regional Coordinator
As Regional Coordinator for the North West, South East Scotland is usually well beyond my range! Nevertheless, on the 17th August, I found myself heading up to Scotland to talk to the Young Marine Rangers of the St. Abbs & Eyemouth Voluntary Marine Reserve about cetacean conservation.
The Young Marine Rangers program is a project initiated by the St. Abbs Marine Reserve aiming to involve more young people in marine conservation issues and inspire a passion for the marine environment. This keen group of teenagers meets on a regular basis under the supervision of St. Abbs Marine Ranger Georgia Conolly, to learn about the marine environment both through class room and practical sessions; running beach cleans and rocky shore surveys. Apart from offering a great experience for aspiring marine biologists, it also allows young people to work towards youth accreditation schemes such as the Scottish Dynamic Youth Development Awards.
I joined Georgia and the Young Marine Rangers to give them a background on Sea Watch’s work, general cetacean biology and provide them with basic training for land and boat based cetacean surveys. The group proved to be keen listeners, eagerly taking notes on the differences between dolphins and porpoises, marvelling at the range of UK cetaceans found in UK waters and asking some of the burning questions on cetacean behaviour that were on their minds. Why do dolphins bowride? Why do they leap? -To both of which the answer is; there are many possible answers but no one really knows!
After having learned about the 16 species that have been recorded in the waters of South East Scotland, the group was eager to move on to the practical outdoor session after lunch; a short opportunistic cetacean survey of the St. Abbs area. The weather looked promising as we headed down to the harbour, clip boards in hand, and as soon as we got on the RIB, we spotted several seals patrolling next to tied up fishing boats. Unfortunately, the wind picked up shortly after leaving the harbour and despite spotting large groups of diving gannets, we were unsuccessful at spotting any cetaceans. The only marine mammals sighted were a couple of curious grey seals surfacing near to the boat as we scanned the area hoping to catch a fleeting glimpse of a dorsal fin slicing through the waves. As the sea state picked up further and we sped homewards, no one remained dry for long, much to the amusement of most members of the youth group!
Despite the lack of actual cetaceans sightings, the Young Marine Rangers enjoyed both the theoretical and practical session and will hopefully be inspired to conduct sea watches of their own in the future!
Photo credits: Katrin Lohrengel 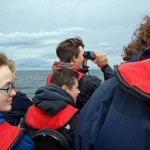 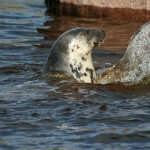 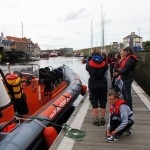 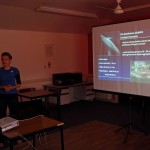