It’s been a busy few days of cetacean spotting on the East Coast of England. Robin Petch (Sea Watch Regional Coordinator and Trustee) has not only seen minke whales when sailing onboard Specksionneer but has also witnessed the, now yearly, appearance of humpback whales off Whitby.

” On the 18th October, there were two animals, one was a juvenile and another large whale with a big blow was seen in the distance. I believe Chris got some video footage so we hope to be able to identify these animals. They may be the same two which overwintered in the North Sea and were frequently seen off Scotland. Maybe our 2010 humpback has returned?

Three days later we saw a single humpback again. It was feeding, coming up head first, water streaming from its mouth and we even heard the jaws clack shut a couple of times! It buzzed the boat a number of times from all angles! Unfortunately, on our afternoon trip, we had to cut the encounter short when a really thick fog came in from nowhere. On the same trip, we also had a porpoise “bow ride”, 3 tail prints port side, one starboard side then on the surface briefly before darting off and surging to starboard. What a day!” 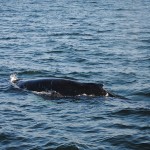 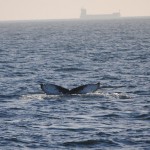