I spy with my little eye… a dolphin! 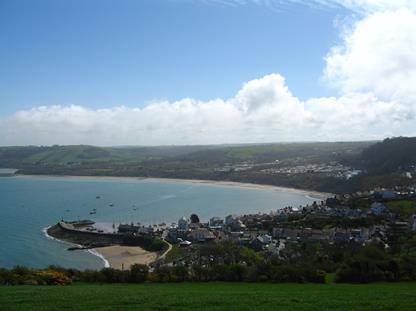 Have you heard of a land-watch? This is an easy non-invasive method of data collection applied by the Sea Watch team. Interns perform land-watches daily to contribute to our database of cetacean sightings.

SWF’s interns arrive in April for the high season. After a week of training and settling in, they get to work gathering data. Land-watches are conducted from April to October with volunteers working in two-hour periods from the pier in New Quay (see location above). Currently these shifts run from 9 am until 7 pm, however, once the days start getting longer land watch will begin earlier from 7 am.  During one of these shifts a variety of information is collected, including effort data, boat activity, boat encounters with cetaceans, and of course sightings of cetaceans.

For effort data the following environmental components are recorded: sea state, wind direction and visibility. These components are recorded every 15 minutes. The sea state is measured with the Beaufort scale and to ensure accurate data collection, land-watches will only be performed between sea state 0 to 3. If it is sea state 4 the land watch will be called off due to the decline in visibility. Visibility is recorded on a scale of 1 to 4, whereby a 1 implies visibility is less than 1 km and a 4 is greater than 10 km visibility . These three components are recorded to ensure reliable data and can help account for correct margin of error when analysing the data. For example, if someone says they see a dolphin with a sea state of 1 and a visibility of 4 then the conditions are favourable making it a reliable sighting. If, however the sea state is 4 with a visibility of 1 then the data may be less reliable and this must be accounted for when analysis of the collected data takes place.

Unlike effort data, boat activity is recorded continuously throughout the two-hour period. Any sea vessel including kayaks and paddle boards are tallied on the land watch form (Figure 2.) under the correct boat type. If a cetacean such as a harbour porpoise, bottlenose dolphin or another species such as a grey seal is spotted, then their presence is noted down alongside the time of the sighting, the number of individuals present, and their behaviour, such as normal swimming or feeding and foraging. Additionally, the location of the animals is marked on a map with a dot, with the direction of travel recorded next to it. If a boat comes within a 300-meter radius of a sighting then this is a boat encounter and the boat name, type, behaviour, and distance to the sighting is recorded. The behaviour of the animals of the sighting towards the boat is recorded as well. 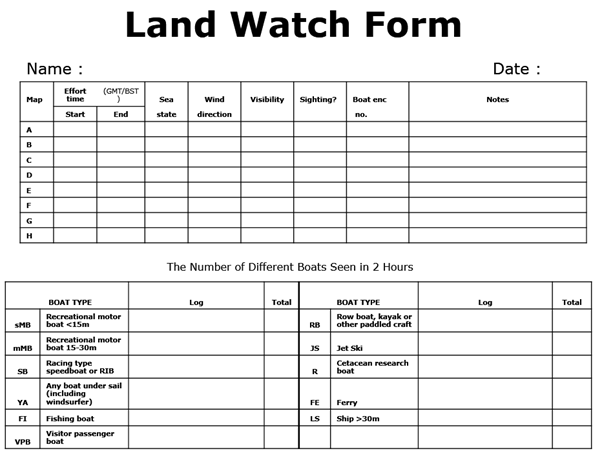 The benefits of this specific method of data collection is that is does not disturb the animals spotted in the bay and permits to monitor the boats and code of conduct. It also requires very little and inexpensive equipment and provides the opportunity to include the public and be available if there are any questions regarding cetaceans or the work done by the Sea Watch Foundation. The disadvantages are that is it less suitable for photo ID, one of the foundation’s main methods for collecting specific information of the dolphins, and that the area of detection of cetaceans is limited compared to for example collection data from the boat.