Thank you to all of you who have submitted a form applying to be an official volunteer. Applications have now closed. We’ll be in touch by email, to those who have sent in a form, by the end of February, to confirm the next steps.

If you missed the deadline, but want to help out with data     collection, don’t worry – there will be plenty of opportunities to support the official volunteers on their watches. Just keep watching this website, or  the Orca Watch 2020 Facebook Page.

Tonight’s episode of Winterwatch (8pm, BBC 2) will include a special focus on Orcas – including the population  of Orcas we look out for each year at Orca Watch. Subject to the time constraints of the programme, we are hoping it will include footage from ‘Wild Therapy’, a film made by Bobby Hardy, during Orca Watch 2019. Bobby’s film follows Andrea Sharp trying to fulfil her lifelong dream to see Orca in the Wild.

We understand that Winterwatch will also be breaking down the two orca ecotypes / communities found around the UK, looking at their diets and tooth structure and also touching on PCB’s in the West Coast community.

So look out for it, and see what could be in store for you if you come up and join us for Orca Watch 2020!

All that and bottlenose dolphins too! So tune in! 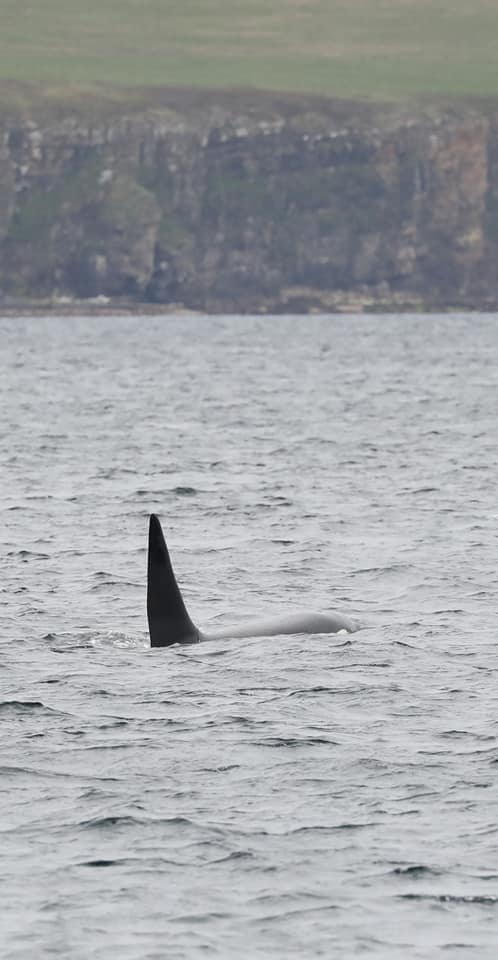 Climate change is currently a hot topic both politically and in the scientific community. In the marine science community, climate change is generally accepted as having the potential to have detrimental effects on the marine ecosystem, some of which have already been observed.

The Sea Watch Foundation holds one of the largest databases on cetaceans sightings and distribution in Europe and distribution maps produced in previous years, particularly of cold water species such as white beaked dolphins already showed some indications of changes in habitat use.

Last year, Dr. Peter Evans, the director of the Sea Watch Foundation worked with the UK, Dr. James Waggit, a researcher from Bangor university who works closely with the Sea Watch Foundation and Marine Climate Change Partnership (MCCIP) to produce a climate change report card, summarising observed and suspected effects on marine mammals. This report has now been published and can be viewed on the MCCIP website. 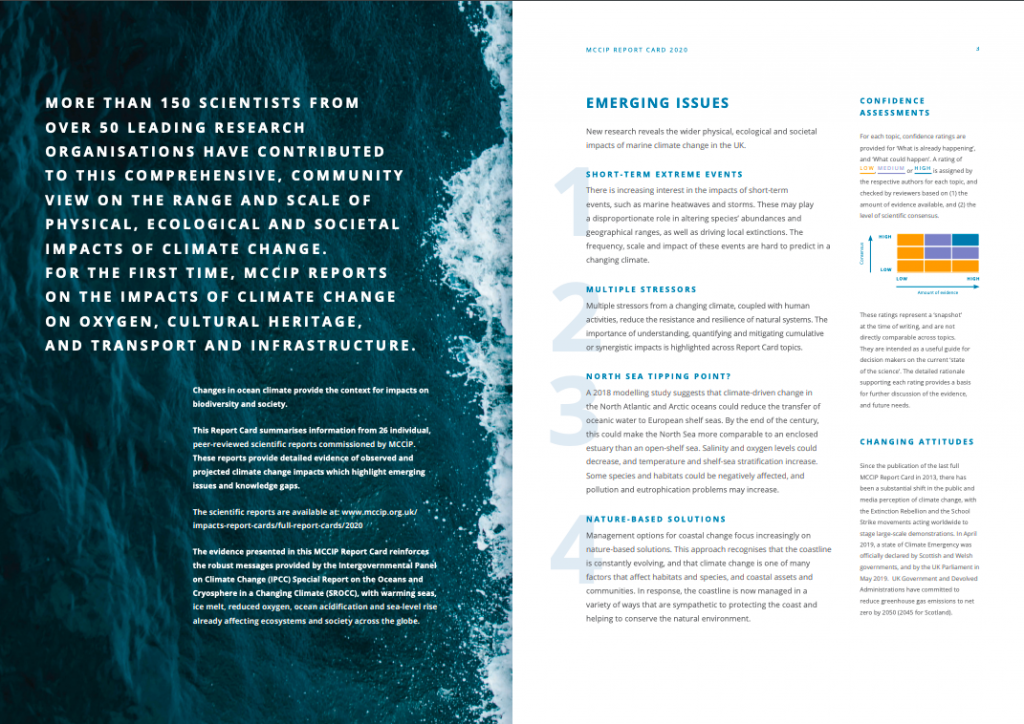 This report confirms some of the trends picked up by Sea Watch distribution maps in previous years. The main effects of climate change on marine mammals are range shifts, loss of habitat, food-web changes, increased exposure to algal toxins and susceptibility to disease. Warm-water species, such as striped dolphin, shortbeaked common dolphin, and Cuvier’s beaked whale are moving northwards and the ranges of cold-water species, such as white-beaked dolphin, are contracting. 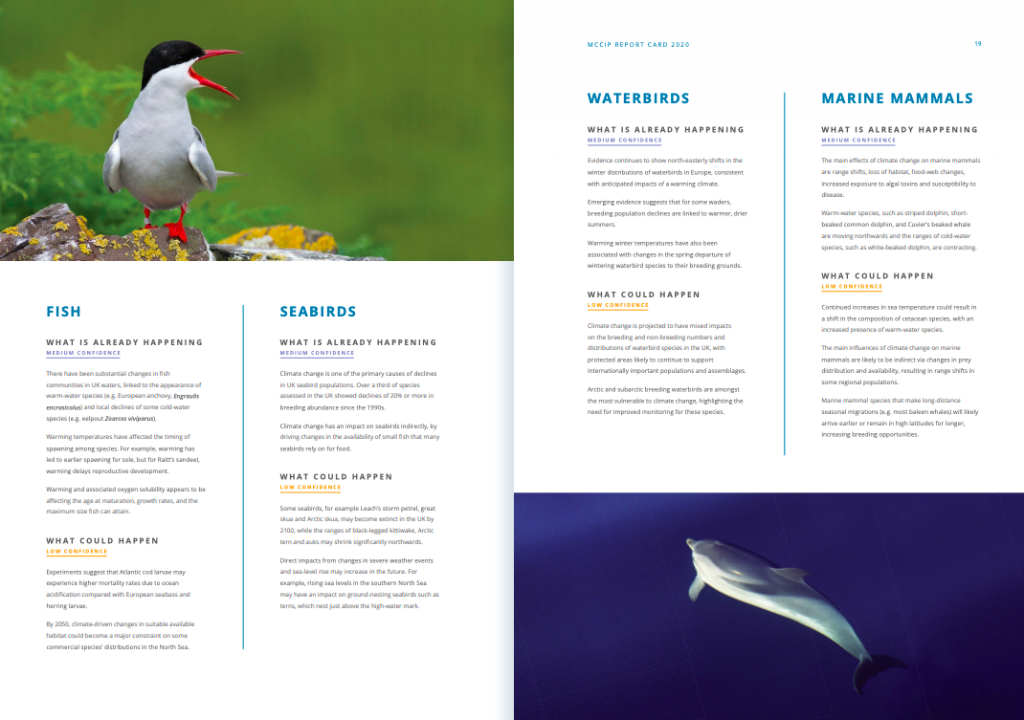 Continued increases in sea temperature could result in a shift in the composition of cetacean species, with an increased presence of warm-water species. The main influences of climate change on marine mammals are likely to be indirect via changes in prey distribution and availability, resulting in range shifts in some regional populations. Marine mammal species that make long-distance seasonal migrations (e.g. most baleen whales) will likely arrive earlier or remain in high latitudes for longer, increasing breeding opportunities.

If you want to contribute to cetacean conservation, check out our ‘Get Involved’ pages to find out what you can do to help. Our volunteer based sightings network has been vital in producing reports such as these. Any observations of cetaceans around the UK can contribute to our understanding of the different species and their habitat use so next time you are heading to the coast, don’t forget your binoculars!

To learn more about how to record cetaceans, check out our recording forms here or contact our Sightings Officer on chiara.giulia.bertulli@seawatchfoundation.org.uk to find out more about how to get involved in observing and reporting cetaceans.

If you have found yourself on the Sea Watch Foundation website, it’s probably because you have an affinity for cetaceans (whales, dolphins and porpoises) and you have definitely come to the right place. The Sea Watch Foundation is a unique conservation charity based in the UK with the aim to monitor and study British whales, dolphins and porpoises and engage the general public with these fascinating animals.

The backbone of the charity is no doubt our director Dr. Peter Evans, the renowned marine mammal scientists who founded Sea Watch. His efforts have been recognised, amongst others, by the European Cetacean Society which honoured him with the European Cetacean Society Conservation Award and by BBC Wildlife which listed him as one of the top 50 most influential conservation heroes in 2016. 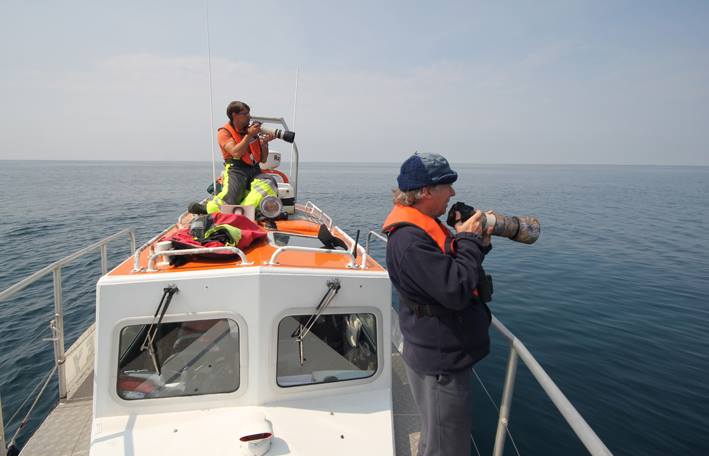 Sea Watch benefits from his knowledge and experience on a daily basis and now so can you! In December 2019, Peter published his most recent book entitled European Whales, Dolphins, and Porpoises: Marine Mammal Conservation in Practice.

The book presents an intimate view of the workings of international conservation agreements to protect marine mammals, detailing achievements over the last 25 years, identifying weaknesses and making recommendations that governments, scientists, marine stakeholders and the public can take to improve conservation efforts. The book provides a unique synthesis on cetacean species status, distribution and ecology. In addition, it presents information on various conservation threats, including fisheries by catch, contaminants, noise disturbance, plastic ingestion and climate change.

This comprehensive resource will appeal to marine mammal conservationists and researchers, as well as environmental and wildlife practitioners at all levels.

If you would like to know more about Peter, check out this interview our Regional Coordinator Angharad conducted in 2016 or read WDC’s Mark Simmonds speech summarising Peter’s remarkable achievements during the 2012 European Cetacean Society conference. 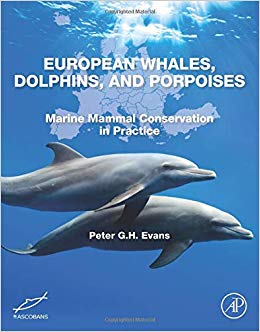 Calling for volunteers – experienced and newbies!

Coming to Orca Watch 2020? Want to develop or refresh your observation skills?

We’re looking for keen volunteers to support the Sea Watch team, collecting data both from the John O’Groats ferry and from the land.We need to collect scientific data to help monitor abundance in the area. No experience is necessary – training will be provided.

Please email orcawatch2020@gmail.com by the end of Friday 31st January, to express your interest and find out more. It would help us process your email quickly if you put ‘Volunteer Scheme’ in the subject line. 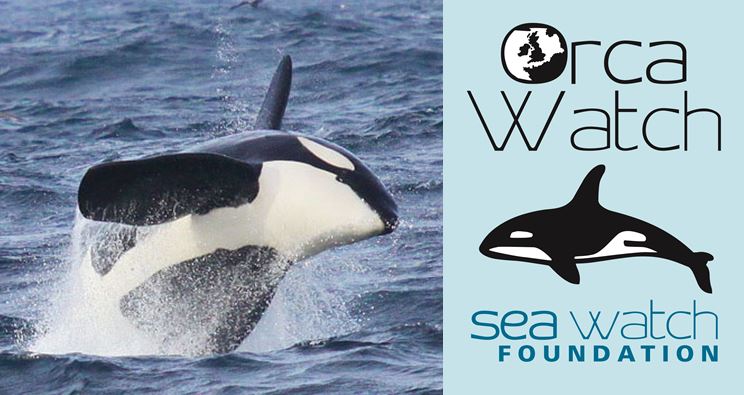