Last week was a busy week here at Sea Watch, as the good weather and calm conditions provided a perfect opportunity to head out to sea! We were lucky enough to carry out surveys every day from Tuesday until Friday, and spotted several bottlenose dolphins, harbour porpoises and the occasional grey seal along the way!

On Tuesday we climbed aboard the Dunbar Castle II and set off on the first of our week of surveys. After a successful morning the sea conditions became a bit too rough, making it very difficult to spot dolphin fins amongst the waves, and so we returned to New Quay early in the hope of better conditions the following day.

On Wednesday we travelled to Aberystwyth to survey on board the Machipe. We spent a long day at sea without spotting a single dolphin, only to come back to New Quay to be told that there had been several dolphins around the bay all day! Typical!

On Thursday  we carried out another survey on the Dunbar Castle II, although this time we ventured further offshore. Moneypenny and her calf Tuppence, and Ebony and her calf were seen just outside New Quay. We spotted several harbour porpoises throughout the day, and then on our way back to New Quay were delighted to see two mothers with their newborn calves. A newborn can be recognised by the presence of foetal folds, which are white creases on the skin caused by being curled in the uterus during gestation. It was great seeing the little ones swimming alongside their mothers, and they really made us laugh with the way they surfaced for air – the grace and elegance of the bottlenose dolphin definitely comes with age!

On Friday our survey took place from our RIB, Gallois, with Charlie, Lumpy, Jagger and our adoptable dolphin Bond all being spotted throughout the day. We also saw three mothers with their calves, including our well known Spot. Calves suckle for up to 20 months, and stay with their mothers for around 3 years. Bottlenose dolphins breed between May and September and gestation lasts for one year, making this a perfect time of year to spot newborns!

All in all it was a very rewarding weeks work, and we look forward to tracking the progress of the new additions to the Cardigan Bay bottlenose dolphin population! 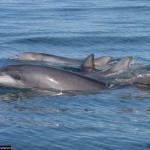 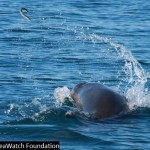 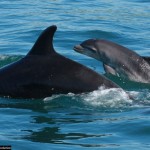