British Divers Marine Life Rescue received a call early this morning to report a pod of stranded pilot whales off Pittenweem, Fife. When the rescue team arrived on site, thirteen of the twenty-six animals which had stranded had already died and despite everyone’s best efforts, a further three would die later in the morning. There were also reports of a second group of 24 animals in the shallows three miles along the coast. By 7pm, the ten surviving animals had been successfully refloated.

Sea Watch observer, John Nadin witnessed the scene: ” It was a very sad sight with 16-17 dead whales of all ages and sexes. The team did a wonderful job getting the ten surviving  whales back in the water. Even after that, the whales still seemed intent on stranding themselves again but the inflatable managed to get them away from the rocks/coast and they apparently headed off s/e.”

The bodies of the dead animals were kept for post-mortem. So far, the post mortem results have not indicated a specific cause of death.

The last record that Sea Watch has of long-finned pilot whales in South-East Scotland dates back to 2007 when a single animal was spotted offshore near the Clyde oil field.

More information on this stranding can be found on the BDMLR news page and the BBC website. 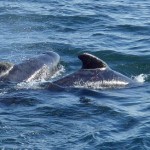 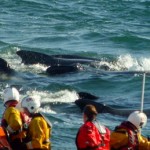 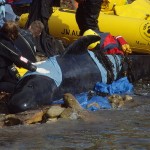 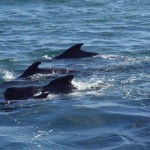