The day arrived when we were to set out on our second survey aboard the Dunbar Castle II (New Quay Dolphin Spotting Boat Trips). The weather wasn’t great, with a light drizzle to set us off. But we all took up our positions around the boat to start looking for dolphins, and just as we turned out of the harbour, we were rewarded with a mum and calf pair. This was the first calf most of the new interns had seen, so a ripple of excitement ran through the boat. Once we had randomly selected which line transect we would conduct for that day, we all poised ourselves to start our first dedicated search until we reached the beginning of the transect. The weather calmed down by the time we started our line transect, so we were treated to clear, calm seas and sunshine, perfect for spotting dolphins in every direction. We were soon greeted by our first lot of dolphins, a large group of around three individuals, including a calf following its mum.  It was all systems go; the flag went up, to show we were on photo ID. We were lucky enough that the dolphins were busy feeding around the boat, so we were able to creep very slowly up to them. This allowed us to accurately observe and note down their behaviours and get clear photos of their fins. After we left this group, we were back on line transect. Then all of a sudden a dolphin surfaced right next to the boat with her older calf, it was then joined by many more and they all started to bow ride. The SWF team then had a job to keep track of all of them, but each member positioned themselves around the boat to ensure every angle was covered. With the crystal clear, calm seas we were able to see the dolphins moving under the water, this presented us with an experience many hadn’t had before, watching their elegant streamlined bodies twisting and turning under the gently waves being produced from the boat, watching them come close to the boat to ride on the bow, then shooting off in different directions, with the mum and calf in synchronisation.

After this amazing close encounter we continued on our transect. Things seemed to quiet down, everyone kept their eyes peeled. Then there was a shout from one of the interns, dolphins spotted in the distance, we manoeuvred towards where they were last seen, everyone on baited breath, eyes peeled, then on the starboard side, a dolphin emerged, taking us all by surprise. We soon realised the dolphin was feeding, conducting tight circles, deep dives and tail slaps. All of a sudden the dolphin emerged with a fish in its mouth, and we watched as it devoured the fish in seconds. We were then greeted to a show of more aerial behaviours, including more deep dives, resulting in amazing tail displays.

As we ended our survey, and returned to New Quay harbour, the excitement of today’s sightings were being discussed amongst everyone around the boat, we noticed there were a lot of people along the pier with cameras at the ready, so we knew there must be dolphins close by. The flag was put up, and with cameras and binoculars ready we all took up our positions to spot the dolphin as the boat slowed to a standstill.  It didn’t take long before she surfaced near the boat, we then realised that this individual was accompanied by a new born calf. This sighting topped off what was a very busy, exciting and successful survey. 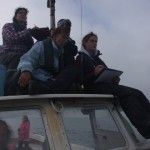 Interns hard at work during a dolphin encounter 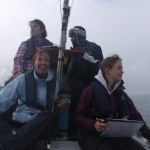 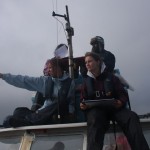 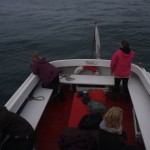 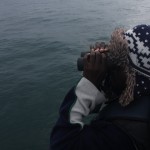 Scanning the horizons for cetaceans 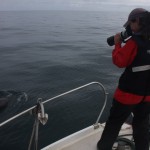