Is it September already? With all the excitement of National Whale and Dolphin Watch and bountiful dolphin surveys all through the summer, we completely forgot to celebrate the first anniversary of the Welsh Sea Watchers Project!  The project has been going strong throughout it’s first year and it’s success has only been made possible through the dedication of our many enthusiastic volunteers.  Let’s look back and reflect on a great summer season with a blog from one of our volunteers, Sarah.

I’m a new volunteer I haven’t done many watches yet but during National Whale and Dolphin Watch Week, I signed on for a two hour stint at the end of Llandudno Pier.  It had been raining all morning but by 3pm the sky was blue with puffs of white cloud.  Me and Charlie sloshed through puddles, weaving through the throng of holiday makers ambling along the prom.  I’d forgotten how long the pier is.  We passed rows of colourful buckets and spades, whirring windmills for the top of sandcastles and pink cuddly dolphins. 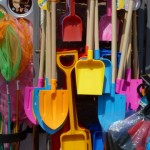 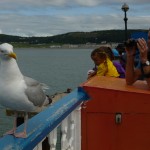 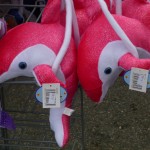 We took our position at the very end of the pier.  White waves licked the top of the dark water, jelly fish drifted under the planking.  Leaning on the rails, I lifted my binoculars and began my watch, scanning from side to side between the headlands.  At first, every wave was a dolphin’s back and I was so twitchy until I got my eye in and settled into the watch.  Gannets fired themselves into the sea sending plumes of spray high, like white fireworks. I watched and I watched.  Groups of sea-skimming cormorants crossed my lenses, necksprotruding, heading for their guano-white landing place at the base of the Little Orme. There was some commotion behind me and I lowered my binoculars in time to see a huge gull fly off with a woman’s pistachio ice cream, she was left open mouthed and empty handed, a look of shocked surprise on her face.

One advantage of watching from this spot is that there is a plentiful supply of hot tea nearby.  Charlie got me a pot and we carried on watching whilst slurping tea and munching on flapjacks.  That seagull was never far away.  I watched it watching every movement people made, eyeing papers, cocking its head to one side at every rustle.  Then suddenly, it swooped in like Zorro and snatched my remaining bit of flap jack and was off without making a sound or touching me.  I had to admire it, even though I was most annoyed.

As compensation, I did catch a glimpse of the soft curve of a porpoises back, gently arching towards the headland.  I scribbled down the details on my form, keeping one eye out for anymore.  I didn’t see any more that day but I enjoyed the chance to sea-gaze through my binoculars.  When else would you give yourself permission to look out to sea for two hours?  It’s very calming and you just never know what you might see.  Watch out for cheeky seagulls though!

Interested in getting involved in the Welsh Sea Watchers Project? Read more about the details of volunteering with Sea Watch or contact our Wales Development Officer, Katrin, on katrin.lohrengel@seawatchfoundation.org.uk