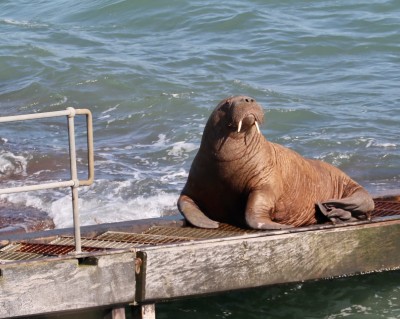 by Monitoring Officer
Comments are off
code of conduct, Marine Code of Conduct, marine mammals, marine wildlife, pembrokeshire wildlife, Sea Watch Foundation, walrus, welsh wildlife, wildlife, wildlife safe, wildlife wise
Wally the walrus has been causing a stir in Wales and has captured the heart of the public. While Wally’s initial appearances were sporadic and in often hard to reach places, he spend around a week in Tenby, hauling out on the RNLI slipway where he was observed- from a safe distance-
Read More

The wonder of whale-watching & how to do it responsibly

by Chiara Giulia Bertulli
Comments are off
boat encounters, boat operators, Boat Trip, boat watches, education, Marine Code of Conduct, RBO, recommended boat operators, sightings network, volunteering, volunteers
This is the latest post in a series which will look at recent advancements, discoveries and trends in the study of whales and dolphins. We here at Sea Watch believe strongly in the free sharing and dissemination of scientific literature and want to give you, our loyal members, the bre
Read More

Minimising the Danger Posed by Seagoing Vessels: The Importance of The Marine Code of Conduct

by Chiara Giulia Bertulli
Comments are off
boats, dolphins, jet-skis, Marine Code of Conduct
With National Whale and Dolphin Watch (NWDW) having just finished, we here at Sea Watch Foundation are seeking to carry this momentum forward by championing that Cetaceans, and the issues they face in an increasingly changeable and hostile world, be given as much coverage on social me
Read More

by Chiara Giulia Bertulli
Comments are off
BDMLR, Marine Code of Conduct, Pilot whales
It was a whole month ago that  Sea Watch Foundation had the first report of possible pilot whales off the South-east coast. Observer, Colin Welsh, suspected he’d seen twenty off Dunwich in Suffolk on October 20th. It was more than two weeks until the same species was spotted again, th
Read More