The Cardigan Bay dolphins are on Countryfile this month!

This summer, the Sea Watch Foundation was joined by some very special guests for one of our summer surveys; 5x paralympic champion Hannah Cockroft and the BBC Countryfile crew visited New Quay and went on survey with our team to learn more about our resident population of bottlenose dolphins and what got Monitoring Officer, Katrin Lohrengel, inspired to work in this field!

Tune in on the 27th January at 16:20 to find out more about how you get started working in marine mammal science, or if you missed it, catch it on BBC iplayer here.

In the mean time read on for a sneak preview of what the team saw that day!

It is always nerve wracking for our team to film with the media because as all wild animals are unpredictable and don’t necessarily show up when you want them to. That is the beauty of watching wild animals but it can make it very difficult for film teams. Luckily, on this occasion, the team was in luck and spotted several groups of dolphins and managed to get up close and personal with a few of them.

The survey was part of an ongoing project, the Cardigan Bay Monitoring Project, run by Monitoring Officer, Katrin Lohrengel. The project monitors the population of semi-resident bottlenose in Cardigan Bay, the largest semi-resident populations in Britain, to assess conservation status, population trends and habitat use. The project submits regular reports to the Welsh government and actively contributes to their ongoing conservation so that many more people can enjoy these beautiful animals in their natural habitats for many generations to come.

The team utilises a method called photo-identification to identify individual animals where permanent, natural occurring markings on the dorsal fin allow them to tell individual animals apart. This allows them to track individual animals, find out more about where they go and who they hang out with as well as giving information on life history cycle and estimates of population size. The markings used are usually the result of social interactions between animals which on occasion get a little bit rough and leave them with permanent marks such as rake and bite marks to their dorsal fins.

Here’s a few pictures Hannah managed to snap, not bad for a first try!

Overall, Hannah and our New Quay team had four encounters with groups of bottlenose dolphins that day. Many people expect dolphin encounters in the wild to be big splashy affairs but as Hannah found out that day, they can be quite secretive as well! During the first encounter that day, the team spotted two dolphins, a mum and a calf which were distinctly camera shy, surfacing rarely and erratically. When dolphins are behaving like this, particularly when young calves are involved, the team try not to press the animals too much and stand off completely if they feel the dolphins might be uncomfortable which was the case during this first encounter. If you are hoping to experience dolphins in the wild and own your own boat, please be aware that it is illegal to approach dolphins without a licence and you should never chase animals. For more information on the proper etiquette around cetaceans, see Sea Watch’s code of conduct page.

Luckily this was not the last encounter of the day and the dolphins in the following encounters were a little bit more cooperative and gave our team and Hannah some beautiful views. Below is an overview of all the dolphins sighted that day. See if you can spot and identify them in the Countryfile footage!

Mum and young calf, no pictures

2 adults, one identified as Viserys (255-14W), probably male. Viserys was probably feeding as was evident by his deep, fluke out dives and erratic surfacing pattern.

Total: 1 adult (female), Rose (019-02S) + juvenile. Rose, her juvenile offspring were spotted suspected feeding and approached the boat for a spot of surfing on the boat’s bow wave!

Based on the information we have collected over the years, we know a little bit about each of the dolphins that we were able to identify: 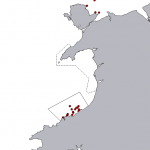 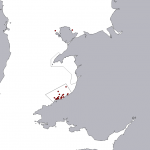 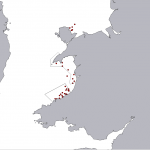 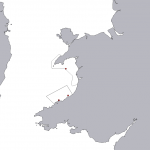 If this Countryfile feature got you excited about dolphins, why not consider volunteering with Sea Watch? Find out how on our Get Involved page.

Or if you want to learn more about what it takes to get started in Marine Mammal Science, have a look at this WiseOceans interview with our Monitoring Officer, Katrin.