In the early weeks of September, Sea Watch Foundation had a very special encounter with a superpod of over 40 Short-beaked common dolphins (Delphinus delphis) whilst participating in a dedicated boat survey in Cardigan Bay, West Wales. This type of encounter was the first in Sea Watch history and was a spectacular experience for all on board, and a particular highlight of my internship so far.

Currently, Sea Watch Foundation monitors approximately 200-250 resident bottlenose dolphins in Cardigan Bay, with around 30 individuals frequenting the New Quay area where Sea Watch is based. These dolphins can be recognised by photo identification matching processes using photographs of their dorsal fins as they are unique to the individual, like fingerprints are to humans! Daily land watch surveys also contribute to data collection on these bottlenoses, which can be interpreted using geographical information systems (GIS) and a coding programme called R.

As much as we love collecting data on our resident and newcomer bottlenose dolphins, it was both a shock and a triumph that we came across a superpod of over 40 common dolphins on our boat survey in early September. This is because common dolphins are usually distributed in the Pacific and Atlantic Oceans, and also in the Mediterranean, as they prefer warmer seas. They are known for visiting coastal areas from time to time but usually reside offshore. It is possible that these type of encounters could be linked to global rising sea temperatures due to climate change but it is difficult to ascertain this for sure.

This species of dolphin is easily distinguishable from bottlenoses. Not only are they significantly smaller in size, ranging from 1.6-2.6m (adults), but common dolphins also have a tell-tale ochre-tan hourglass pattern on their lower flanks, making them harder to misidentify. Bottlenose dolphins on the other hand, can grow up to 4m in length and are typically a dark grey colour with a white stomach. Common dolphins are also characteristically more interactive and often bow-ride alongside boats and breach from the water, which is a joy to see! Another difference between the two species’ is that common dolphins tend to travel in large pods and socialise with one another, whereas bottlenose dolphins are inclined to travel in smaller groups (but not always) and are less interactive with vessels.

In addition to being an amazing encounter, this large and very social group gave us the opportunity to use our drone to film the animals and look at how they interact with each other just under the surface. It was particularly interesting to see the calves riding the slipstream of their mothers in a protected position slightly behind and below the adult. 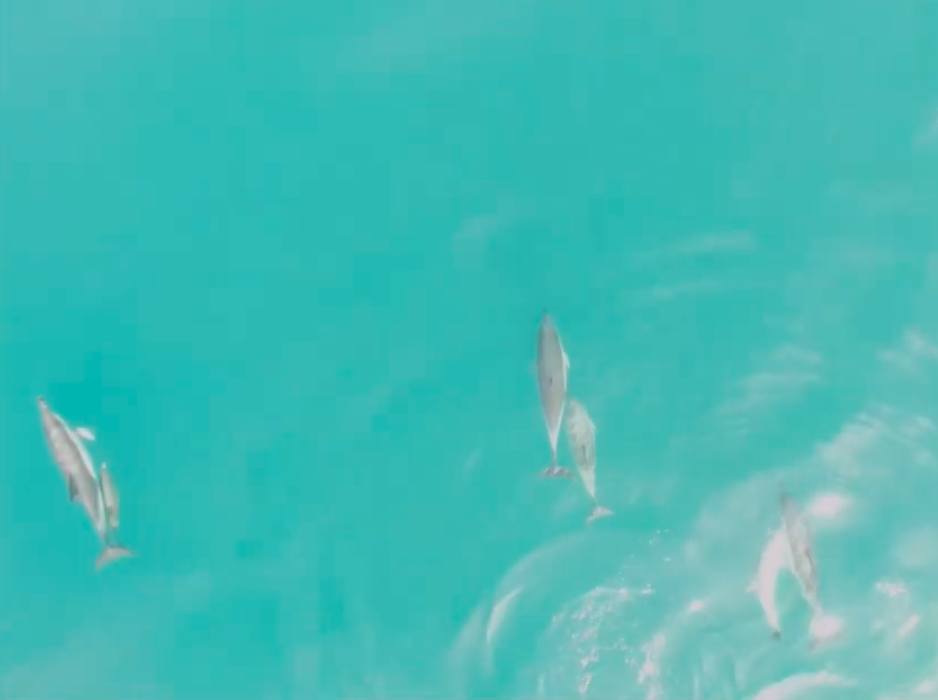 The aerial view also allowed us to see adult animals socialising from a different point of view, swimming belly to belly or touching pectoral fins which is thought to reinforce social bonds. 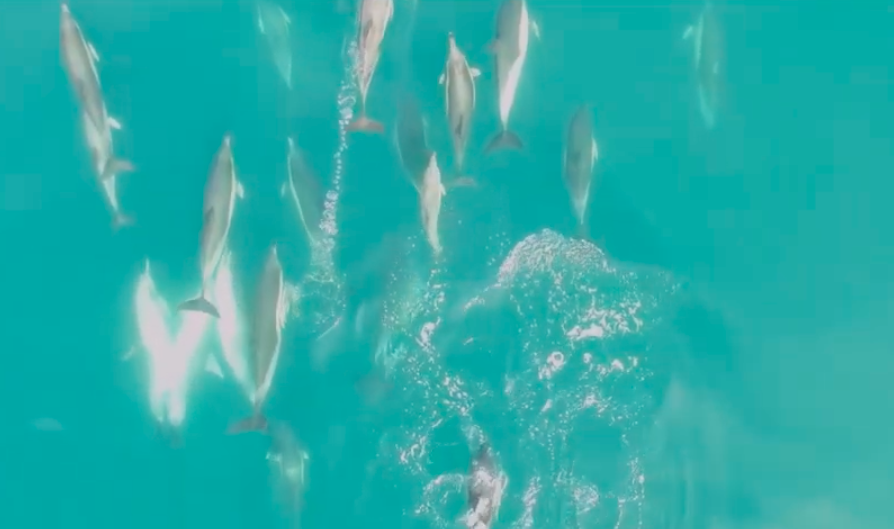 On reviewing the footage, we also noticed an adult animal with an unusual surfacing pattern which seemed to trail an unusually long bubble stream during each submersion. In conjunction with our photo-ID data, our Monitoring Officer was able to match this animal to another common dolphin encounter from the previous year where this individual was noticed due to its unusual surfacing pattern. We hope to study the drone footage and photo-ID images further to see whether we can spot an injury that may explain this unusual behaviour.

We hope that these common dolphin encounters are on the rise so we can gain a deeper understanding of how they socialise and behave in this kind of coastal environment. Further research and monitoring will bridge the knowledge gaps that currently exist about this species and their behaviour in UK waters.