The Cardigan Bay Monitoring Project is the flagship project of the Sea Watch Foundation (SWF). Based in New Quay, Ceredigion, SWF has been studying the only semi-resident population of bottlenose dolphins in Wales, and the largest in the UK, since 2000. With two decades of experience studying Welsh bottlenose dolphins, the Cardigan Bay Monitoring Project is one of the longest running monitoring projects in Europe.

Cardigan Bay is home to a variety of unique habitats and marine wildlife such as bottlenose dolphins, and in recognition of this, two Special Areas of Conservation (SACs), the Cardigan Bay SAC and the Pen Llyn a’r Sarnau SAC, have been designated under the EU Habitats Directive. SWF’s work in Cardigan Bay was instrumental in the initial designation and since then we have worked closely with Natural Resources Wales, Ceredigion County Council and other organisations such as Joint Nature Conservation Committee to continue to monitor the Cardigan Bay population of bottlenose dolphins and ensure their survival. 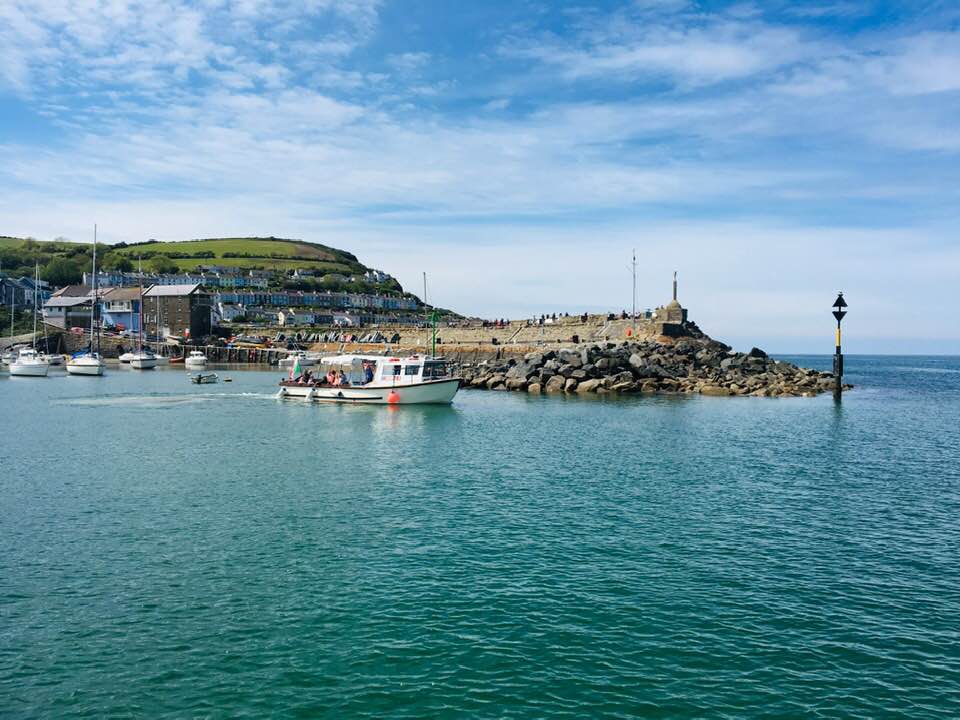 Cardigan Bay is the largest bay in the British Isles, stretching approximately 100km from the Llyn Peninsula in the north to Strumble Head in the south. It provides a shallow, sheltered habitat for marine wildlife, which is likely to be one of the reasons that it is favoured by bottlenose dolphins which give births to their calves here every year.

In the summer, the cliffs around New Quay are host to one of the largest seabird breeding colonies in Wales, and large numbers of guillemots, razorbills and kittiwakes come to mate and raise their chicks here every year. Fulmars, great black-backed gulls and herring gulls are also commonly sighted and, further out at sea, Manx shearwaters and storm petrels are frequently seen.

The bay includes several rare habitats such as rocky reefs, sandbanks and sea caves that are protected under the EU Habitats Directive. The variety of habitats and substrates that can be found here is likely to be a significant factor in the abundance of marine wildlife that calls Cardigan Bay its home.

In order to protect the unique wildlife and habitats of Cardigan Bay, there is a strict code of conduct in place to prevent disturbance of animals and destruction of delicate habitats that all marine users need to abide by. There is more information available on the marine code of conduct here.

Research carried out by the Cardigan Bay Monitoring Project has been providing information on habitat use, social structure, and population trends for two decades. In addition to this, we have also carried out a number of studies on the effects of boat traffic and human disturbance on bottlenose dolphins. 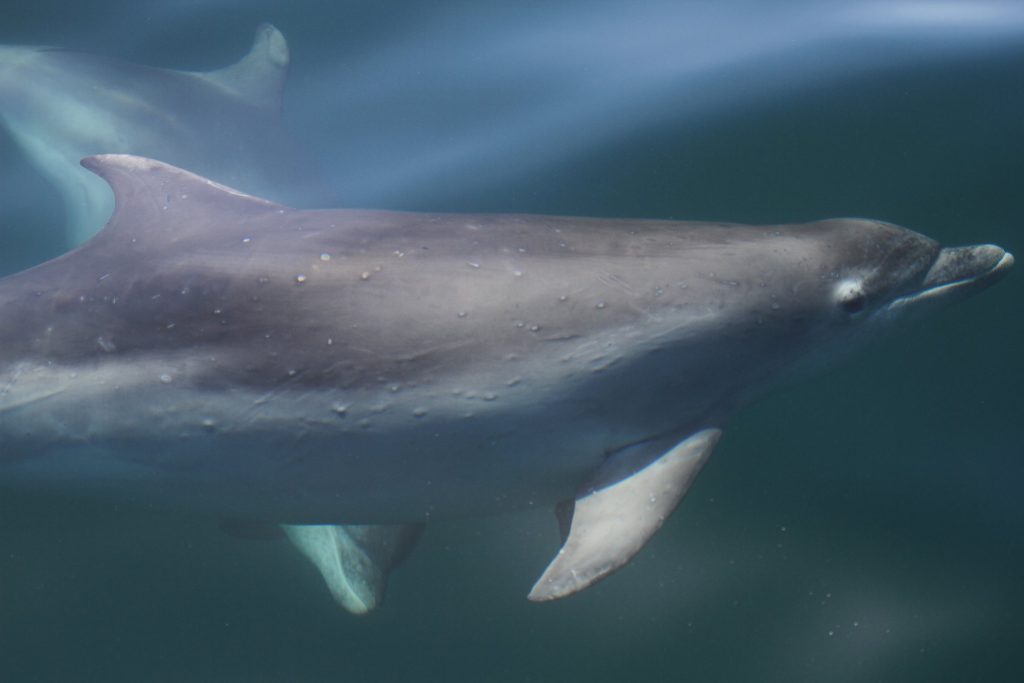 Within Cardigan Bay, there is a population of about 200 individuals. The dolphins live in what is known as a fission-fusion society. This is a fluid society structure where individuals may stay together for a few hours or a few days before splitting up and forming new groups, although there are some that form long-term associations. Adult bottlenose dolphins tend to associate preferentially with adults of the same sex, and in southern Cardigan Ba, we often encounter ‘nursery groups’ –  groups of dolphins with multiple mother-calf pairs. Calves can be present all year around but the majority are born in the summer months between May and August. Gestation is approximately 12 months and calves stay with their mothers for an average of 3 years, although the record currently stands at 7 years for a young dolphin named Tigger who has only recently left his mum! 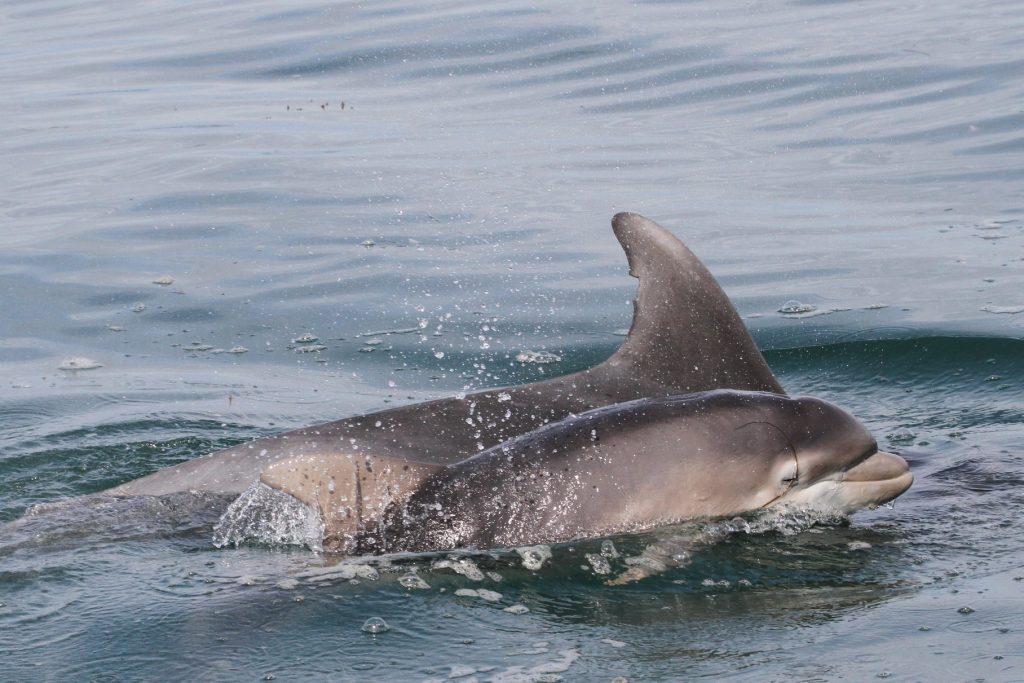 On average, dolphin groups number around six individuals in Cardigan Bay SAC, although we commonly observe larger groups in Pen Llyn a’r Sarnau SAC in the north, or during the winter months when prey is more patchily distributed and animals aggregate around limited resources. Dolphin behaviour varies with season, and whereas some animals stay in Cardigan Bay throughout the year, a large proportion migrates north towards Anglesey and the Isle of Man in pursuit of prey.

Population numbers appear to have fallen in recent years, However, it is unclear whether this is part of a natural cycle or due to another underlying factor. There has been some suggestion that dolphins have responded negatively to particular human activities such as scallop dredging and increased boat traffic; the sharpest decline in numbers was seen immediately after the year that Cardigan Bay was opened up to scallop dredging, and high levels of recreational boat traffic have been shown to negatively impact social structure of dolphins in Cardigan Bay.

Bottlenose dolphins can be identified by nicks and notches on their dorsal fins using a technique called photo-identification. This was first trialled in the 1970s and has now become a staple of dolphin research. By taking photographs of dolphins when they are encountered, researchers can identify individual animals based on nicks, notches and scratches on their dorsal fins and keep a record of where and when they are seen. This also enables us to track dolphin movements throughout the season, estimate population numbers, and look at social structure. 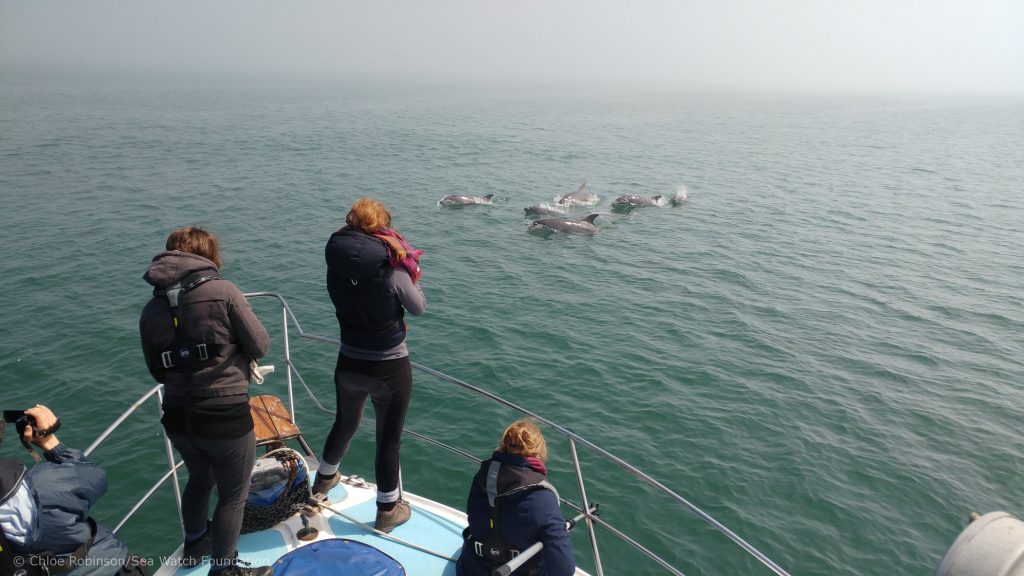 Marks on the fins of bottlenose dolphins are usually the result of interspecific interactions, that is dolphin on dolphin aggression or other physical interactions. While socialising, dolphins may bite or rake each other with their teeth to express dominance, leaving characteristic marks that researchers can use to tell individuals apart. It is generally thought that male dolphins tend to be more heavily marked than females as they are more likely to be part of aggressive interactions, although this is not always true. 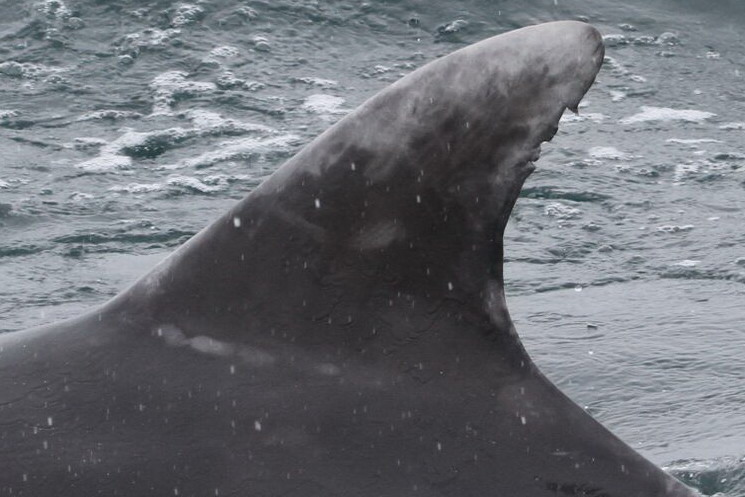 Over the years, we have been able to build up a picture of the lives of individual dolphins, and have been able to distinguish distinct differences in habitat use. The majority of animals are considered to be resident. These animals typically have quite small home ranges and are sighted year after year; some have been spotted as often as 200 times! And some of these dolphins have been known for over 20 years. Another part of the population is considered to be visitors. These dolphins are typically seen only every 2-3 years and have large home ranges encompassing large parts of both the north and south of Cardigan Bay. Finally, there are transient animals which we have only seen once or twice in the last 20 years.

Throughout the summer months, data are collected during dedicated surveys, as well as from wildlife tours and land based watches. The team is led by the Monitoring Officer, Katrin Lohrengel, and supported by a group of interns, a Research Assistant and an Education Assistant. Interns join the project from all around the world from seven weeks to six months at a time. 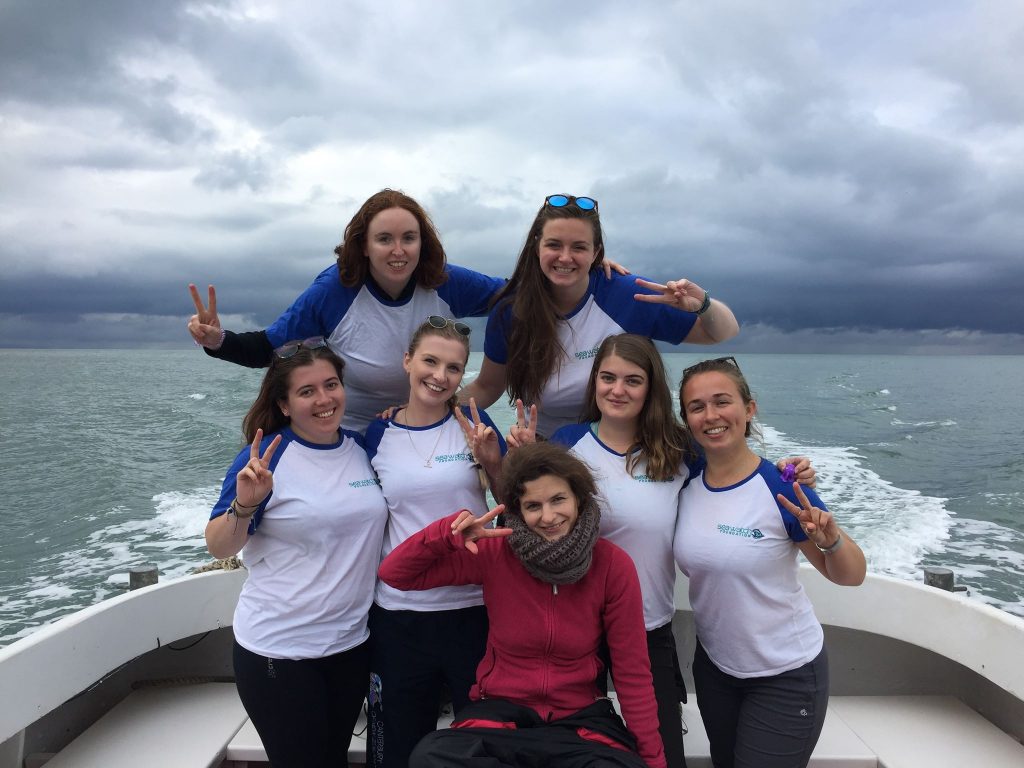 Each intern is trained in data entry, photo-identification and data collection in the field. It is a rare opportunity for recent graduates to gain direct experience in the competitive field of marine mammal science, and many of our interns now work in the zoological and conservation fields. For more information on how to get involved, visit our internship page.

“I found this internship to be a brilliant experience, both professionally and personally. I would be delighted to work with SWF again” – Emma Tiernan, Research intern 2019

The best time to see dolphins in Cardigan Bay is the summer months between May and September which also coincides with the main calving season. Bottlenose dolphins are spotted throughout the bay but it is generally easier to do so in the southern Cardigan Bay SAC. 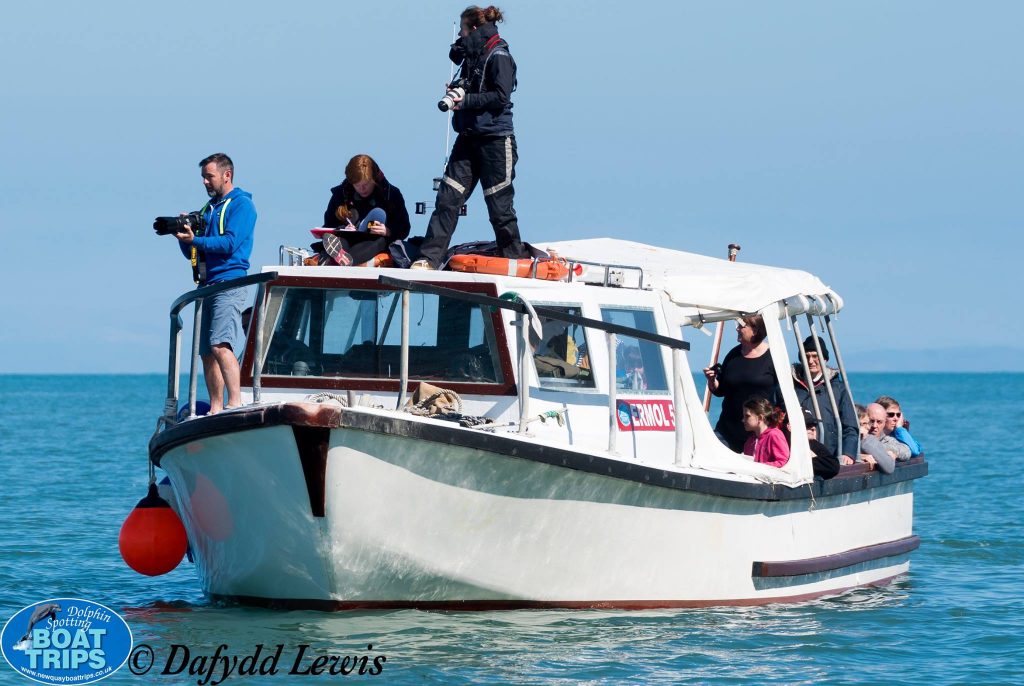 However, it is not necessary to step on a boat to see dolphins. There are a number of hot spots around the Ceredigion coast such as New Quay pier where dolphins are easily observed from land, some of which are readily accessible by people of all abilities. Dolphins are often observed around headlands, in areas of upwelling, or in the vicinity of estuaries. In the southern part of the bay, Llangrannog, Mwnt, Pen Peles and the headland opposite Cardigan Island afford the best chances of seeing dolphins. In the north, Aberdyfi, Barmouth, the Tudwals and Hell’s Mouth are usually good spots to see them, although they have also been known to venture into Aberystwyth harbour.

Cardigan Bay is a truly special place for the variety of both amazing wildlife and unique habitats that can be found here and we are very thankful to be able to work here. If you would like to support our work, consider adopting a dolphin, joining our supporter scheme (coming soon!) or get involved through our volunteering and internship schemes.

If you would like to download this information and more,  check out this handy PDF guide to the Cardigan Bay Monitoring Project. 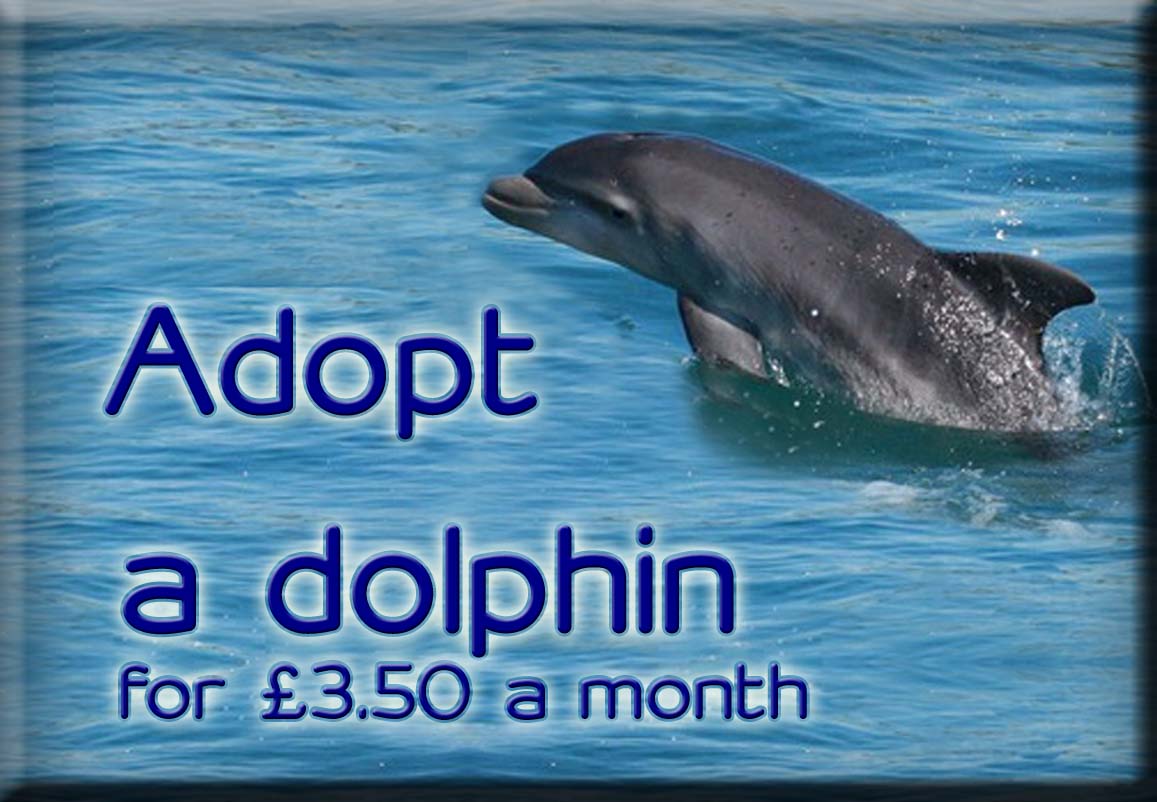 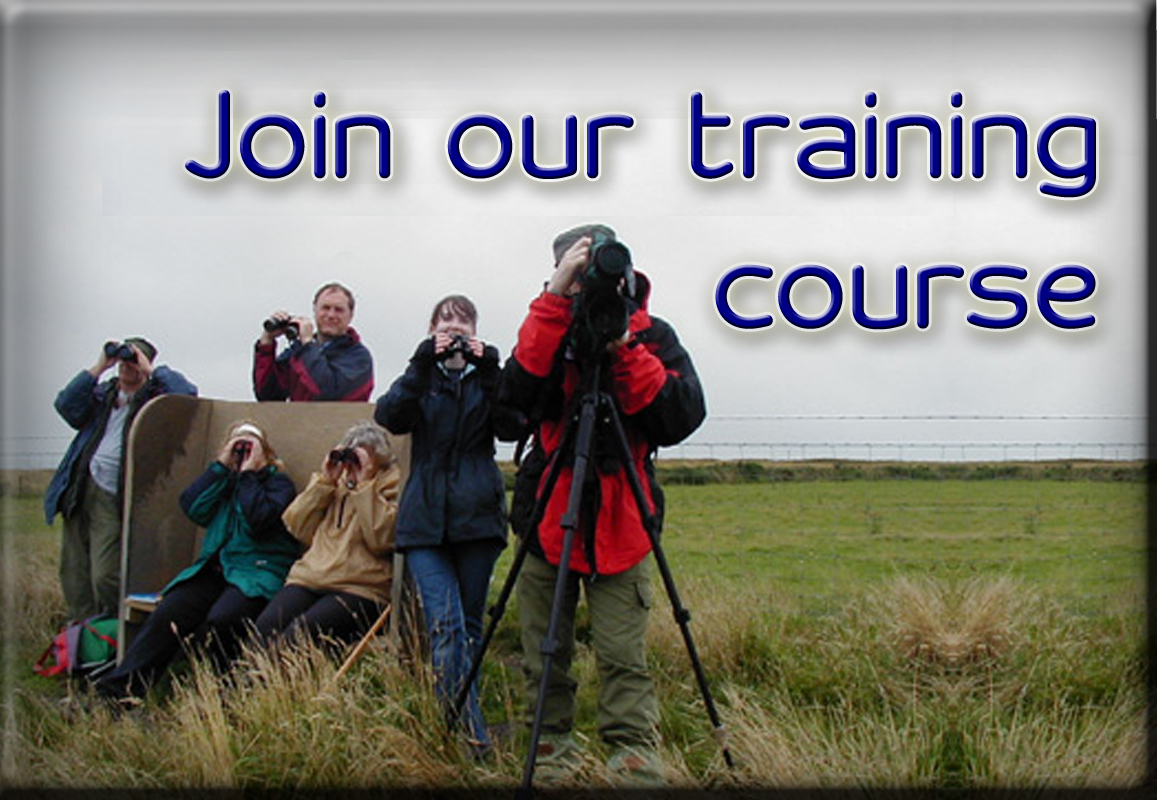 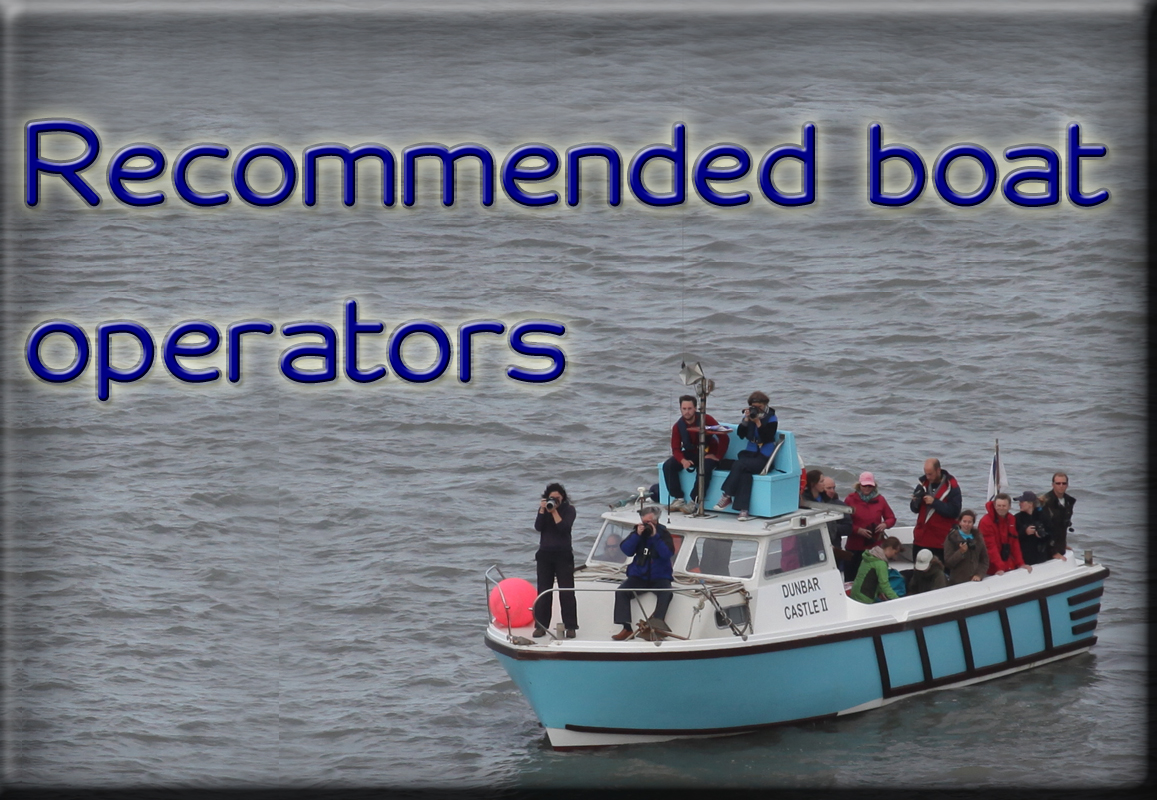 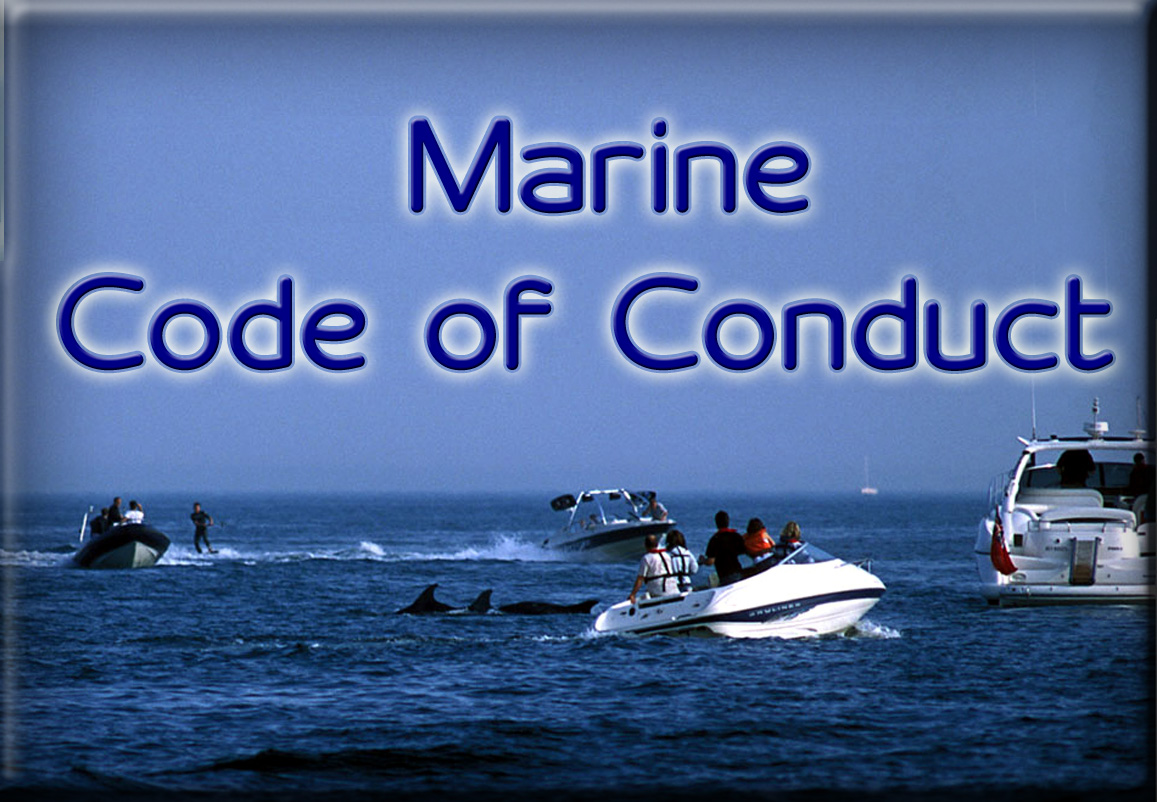 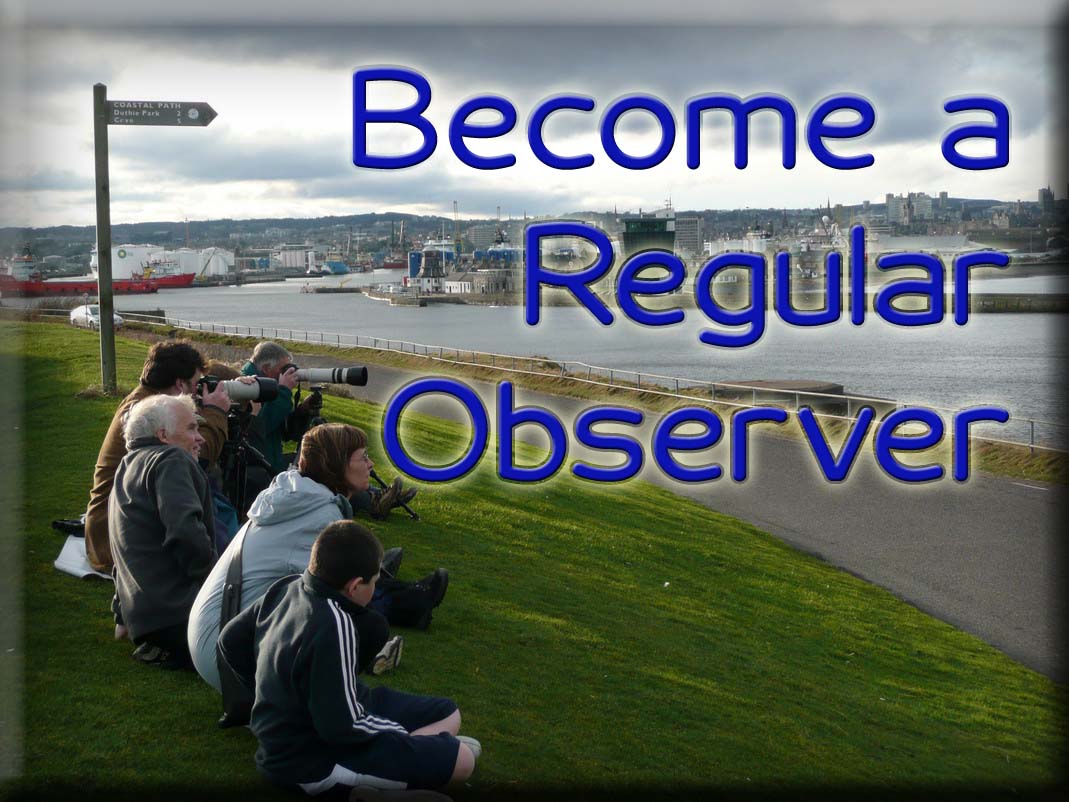