An unprecedented effort to protect orcas with citizen science: the 2019 Orca Watch event results are out! 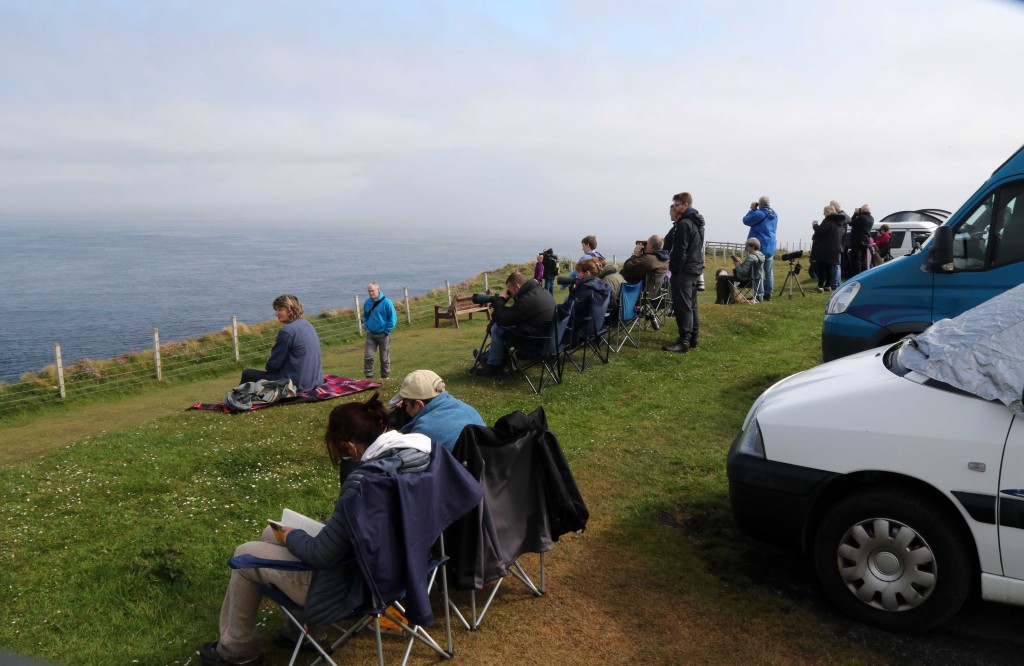 For ten days in late May, tourists, wildlife enthusiasts and local businesses around Caithness, Orkney and Shetland support Orca Watch, a citizen science project organized by the Sea Watch Foundation now in its 8th year, hoping to catch a glimpse of killer whales otherwise known as orcas, and any other species of cetacean (whale, dolphin and porpoise) visiting the  waters of the Pentland Firth.

They stand endlessly from cliff tops and from the John O’Groats ferry decks, collecting sightings, behaviour, geographical positions and photographs of orcas and any other cetacean  species which passes by.

The idea of organizing this event started with Colin Bird, Sea Watch’s long-standing Regional Coordinator for North-East Scotland, and was influenced by concerns over the possibility of underwater turbines installed in the Pentland Firth. This initiated the first seasonal watch in 2012 to gather information on how orcas use this area and what might be the consequences of such an installation.

“Without knowing how orcas or other cetaceans use the Pentland Firth, or which role they play in the ecosystem in the area, it is impossible for scientists and conservationists to know how to develop plans to protect them” says Dr Chiara Giulia Bertulli, Sightings Officer and lead organizer of this year’s Orca Watch event.

The Sea Watch Foundation in collaboration with eight other organizations (Whale and Dolphin Conservation, Scottish Natural Heritage, John O’Groats Ferries, Pulteneytown People’s Project, RSPB Orkney, Sanday Development Trust, High Life Highland Countryside Rangers, and the Hebridean Whale and Dolphin Trust) aims to change that with a research project that enlists the help of citizen scientists from all around Scotland and its offshore Isles.

During the 2019 Orca Watch, hundreds of volunteer observers spent almost 200 hours (100 more than in 2018) collecting 122 sightings of seven different cetacean species, stationed at 30 land watch sites (main site at Duncansby Head, Caithness) and aboard one vessel (operated by the John O’Groats Ferries) around Caithness, Orkney, and Shetland. Orca sightings were also sent in from the west coast of Scotland and the Hebrides. 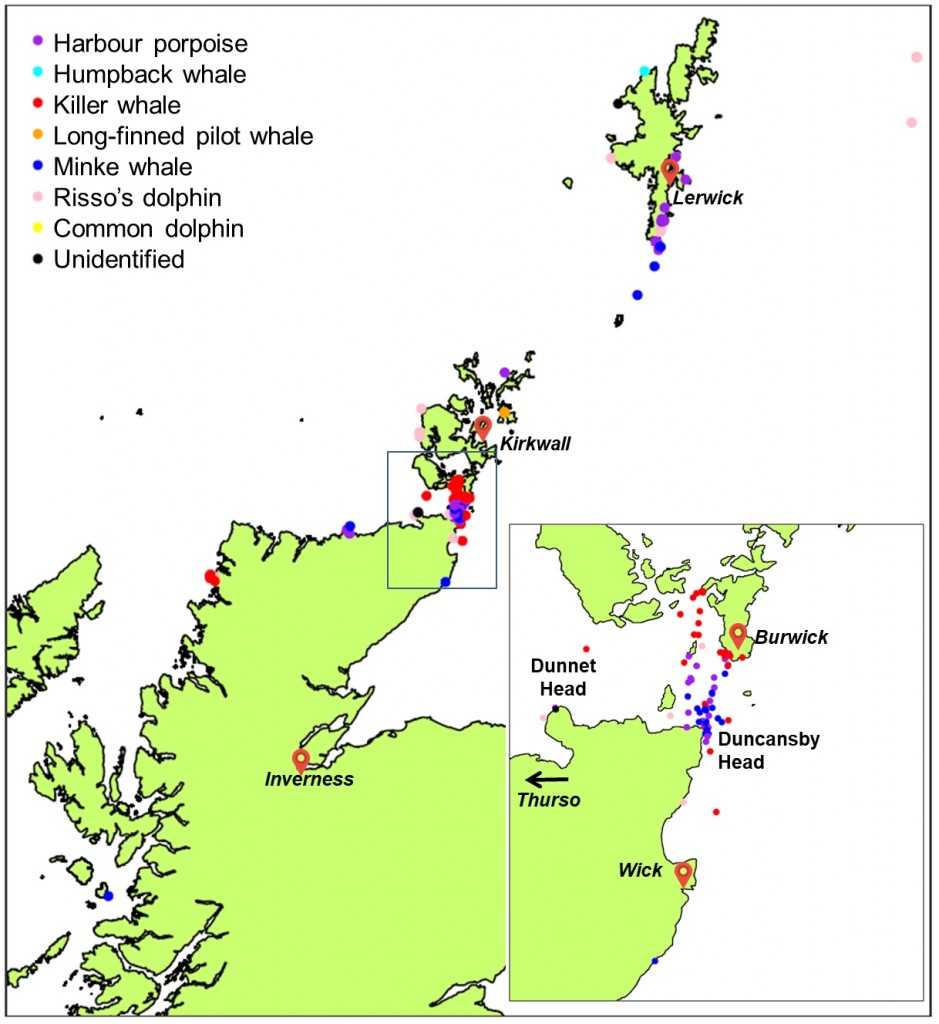 “This looks like being the best Orca Watch event of the last few years”, reported Dr Chiara Giulia Bertulli.

Harbour porpoises were the most commonly sighted species during Orca Watch. This species was recorded 46 times (38% of all records).

The Orcas were the second most commonly sighted species during Orca Watch, with 27 sightings (22%). Groups varied in size from a single individual to a group of 10 with an average group size of 3. Sightings were distributed around Orkney and Caithness, with few sightings also reported from Sutherland (Handa Island) and from the Outer Hebrides (Isle of Lewis). Orcas were first spotted on May 17st from Hoxa Head (Orkney) and on May 19th they were sighted off both Handa Island and Gary Beach, Isle of Lewis. On May 20th they were sighted from three different location around Orkney (Buwick, Hoxa Head, Lidell) and then in Caithness on May 21st during the morning ferry ride onboard the Pentland Venture (John O’Groats Ferries). After two days of bad weather and no further sightings morale seemed low. 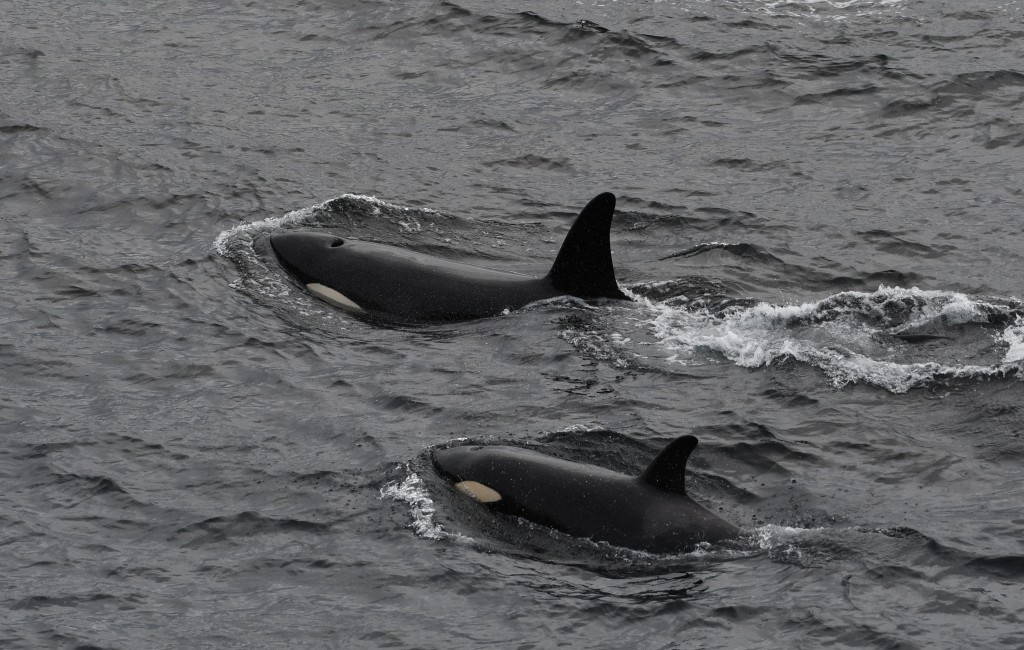 However at dusk on May 24th they were finally sighted at the Stacks of Duncansby and remained in the area through May 25th and 26th. Two known orcas were also sighted on May 26th from Burwick and Duncansby and from onboard the John O’Groats ferries. They are commonly referred to as “Hulk” and “Nótt”, which are orcas that are known to travel between Iceland and Scotland on foraging trips.

Video footage collected by Simon Ernst, Orca Watcher and Sea Watch volunteer observer, who filmed a pod of orcas passing by the Stacks of Duncansby on May 24th.

Minke whales were the third most abundant species recorded during Orca Watch, with 26 sightings being made, accounting for 21% of all records.

“Never in my wildest dreams did I imagine it would be that amazing! – spending the whole day watching them swimming off Hoxa Head as the light started to fade was something I am not going to forget easily” said Christina Worth, a Sea Watch Volunteer Observer, who sighted the orcas during her land-watch off Hoxa Head.

“Other interesting sightings from this year’s Orca Watch week included a humpback whale sighted off Nista Skerries, Uyea, a lone common dolphin encountered on May 21st off Gletness, Shetland, and many close encounters with minke whales sighted off Duncansby Head”, added Chiara.

“We are very pleased with the amount of information we have gathered during this year’s Orca Watch and our immense gratitude goes to our lead volunteer organizers from all of the groups (particularly Anna Jemmett, Lucy Baldwin, Steve Truluck, Rob Lott, Karen Hall, Emma Neave-Webb, Colin Bird, and Karen Munro), to all our network of volunteer observers, regional coordinators, to our partners and to all the local businesses that have pitched in, offered generous discounts and taken great care of all our Orca Watchers”, concluded Chiara.